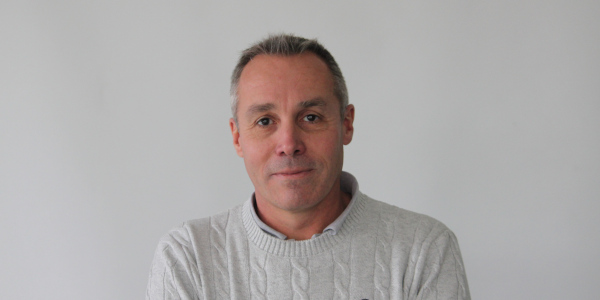 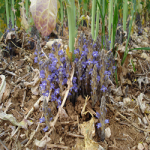 Phelipanche ramosa is an obligate root-parasitic weed that threatens major crops in central Europe. In order to germinate, it must perceive various structurally divergent host-exuded signals, including isothiocyanates (ITCs) and strigolactones (SLs). However, the receptors involved are still uncharacterized. Here, we identify five putative SL receptors in P. ramosa and show that PrKAI2d3 is involved in the stimulation of seed germination. We demonstrate the high plasticity of PrKAI2d3, which allows it to interact with different chemicals, including ITCs. The SL perception mechanism of PrKAI2d3 is similar to that of endogenous SLs in non-parasitic plants. We provide evidence that PrKAI2d3 enzymatic activity confers hypersensitivity to SLs. Additionally, we demonstrate that methylbutenolide-OH binds PrKAI2d3 and stimulates P. ramosa germination with bioactivity comparable to that of ITCs. This study demonstrates that P. ramosa has extended its signal perception system during evolution, a fact that should be considered for the development of specific and efficient biocontrol methods.

Seeds of the parasitic weed are well adapted to their hosts because they germinate and form haustorial structures to connect to roots in response to diverse host-derived molecular signals. presents different genetic groups that are preferentially adapted to certain hosts. Since there are indications that microbes play a role in the interaction especially in the early stages of the interaction, we studied the microbial diversity harbored by the parasitic seeds with respect to their host and genetic group. Twenty-six seed lots from seven cropping plots of three different hosts-oilseed rape, tobacco, and hemp-in the west of France were characterized for their bacterial and fungal communities using 16S rRNA gene and ITS (Internal transcribed spacer) sequences, respectively. First seeds were characterized genetically using twenty microsatellite markers and phenotyped for their sensibility to various germination stimulants including strigolactones and isothiocyanates. This led to the distinction of three groups that corresponded to their host of origin. The observed seed diversity was correlated to the host specialization and germination stimulant sensitivity within species. Microbial communities were both clustered by host and plot of origin. The seed core microbiota was composed of seventeen species that were also retrieved from soil and was in lower abundances for bacteria and similar abundances for fungi compared to seeds. The host-related core microbiota of parasitic seeds was limited and presumably well adapted to the interaction with its hosts. Two microbial candidates of species and were especially identified in seeds from oilseed rape plots, suggesting their involvement in host recognition and specialization as well as seed fitness for by improving the production of isothiocyanates from glucosinolates in the rhizosphere of oilseed rape.

The caption to Fig. 4 belonged to Fig. 5 and vice versa in the initial online publication. The original article has been corrected.

Karrikins stimulate Arabidopsis thaliana germination, whereas parasitic weeds of the Orobanchaceae family have evolved to respond to host-exuded compounds such as strigolactones, dehydrocostus lactone, and 2-phenylethyl isothiocyanate. In Phelipanche ramosa, strigolactone-induced germination was shown to require one of the CYP707A proteins involved in abscisic acid catabolism. Here, germination and gene expression were analysed to investigate the role of CYP707As in germination of both parasitic plants and Arabidopsis upon perception of germination stimulants, after using pharmacological inhibitors and Arabidopsis mutants disrupting germination signals. CYP707A genes were up-regulated upon treatment with effective germination stimulants in both parasitic plants and Arabidopsis. Obligate parasitic plants exhibited both intensified up-regulation of CYP707A genes and increased sensitivity to the CYP707A inhibitor abscinazole-E2B, whereas Arabidopsis cyp707a mutants still positively responded to germination stimulation. In Arabidopsis, CYP707A regulation required the canonical karrikin signalling pathway KAI2/MAX2/SMAX1 and the transcription factor WRKY33. Finally, CYP707As and WRKY33 also modulated Arabidopsis root architecture in response to the synthetic strigolactone rac-GR24, and wrky33-1 exhibited a shoot hyperbranched phenotype. This study suggests that the lack of host-independent germination in obligate parasites is associated with an exacerbated CYP707A induction and that CYP707As and WRKY33 are new players involved in a variety of strigolactone/karrikin responses.

Summary We developed 20 microsatellite markers to genotype over 100 populations of the parasitic weed Phelipanche ramosa, which covers a wide host crop and geographic range. A representative core collection of 15 populations was also used in cross-infestation assays to study host preference during germination, attachment and shoot formation. We observed low genetic differentiation within most of the populations, but high genetic differentiation between populations partitioned into 3 genetic groups with different host preferences and geographic distributions. Genetic group 1 is detected exclusively in western France and on various host crops, notably winter oilseed rape (WOSR) and not hemp. Cross-infection assays confirmed its incompatibility with hemp and showed its preference for WOSR and tobacco in terms of germination and attachment success. The group 2 populations share a large geographic distribution in France and Europe, low germination success with WOSR and high germination success, attachment success and shoot formation with hemp, tobacco or tomato. The subclades 2a and 2b include most of the French populations in hemp crops in eastern France and in tobacco fields in several European countries respectively. The genetic analyses revealed the potential of the three groups to increase their geographic range in the future. Intermediate genetic groups showed higher intrapopulation diversity and represent potential stocks for new host race emergence. Those findings argue in favour of the existence of host races in P. ramosa and should be considered for appropriate management strategies, notably in breeding programmes for resistance against this parasitic weed.

The heterotrophic lifestyle of parasitic plants relies on the development of the haustorium, a specific infectious organ required for attachment to host roots. While haustorium development is initiated upon chemodetection of host-derived molecules in hemiparasitic plants, the induction of haustorium formation remains largely unknown in holoparasitic species such as Phelipanche ramosa. This work demonstrates that the root exudates of the host plant Brassica napus contain allelochemicals displaying haustorium-inducing activity on P. ramosa germinating seeds, which increases the parasite aggressiveness. A de novo assembled transcriptome and microarray approach with P. ramosa during early haustorium formation upon treatment with B. napus root exudates allowed the identification of differentially expressed genes involved in hormone signaling. Bioassays using exogenous cytokinins and the specific cytokinin receptor inhibitor PI-55 showed that cytokinins induced haustorium formation and increased parasite aggressiveness. Root exudates triggered the expression of cytokinin-responsive genes during early haustorium development in germinated seeds, and bio-guided UPLC-ESI(+)-/MS/MS analysis showed that these exudates contain a cytokinin with dihydrozeatin characteristics. These results suggest that cytokinins constitutively exudated from host roots play a major role in haustorium formation and aggressiveness in P. ramosa.

The plant-parasitic plant interaction is a interesting model to study sink-source relationship and phloem unloading. The parasitic plants, such as the achlorophyllous plant Phelipanche ramosa, connect to the host phloem through the haustorium and act as supernumerary sinks for the host-derived photoassimilates, primarily sucrose. The application of the fluorescent symplastic tracer, carboxyfluorescein (CF) derived from carboxyfluorescein diacetate (CFDA), to the leaves of the host plant (Brassica napus) showed direct phloem connections at the host-parasite interface. These experiments also evidenced the dominant apoplastic pathway for phloem unloading in major vegetative sinks of the parasite, including tubercles and shoots, except the adventitious root apices. The CF experiments showed also the symplastic isolation of the phloem tissues from the sink tissues in tubercle and shoot of the parasite, then suggesting the pivotal role of sucrose transporters in sucrose unloading in P. ramosa sinks. Three cDNAs encoding sucrose transporters (PrSUT) were isolated from the parasitic plant. PrSUT1 transcripts accumulated at the same level in the tubercle throughout the parasite growth while a significant increase in transcript accumulation occurred after emergence in the flowering shoot, notably in the growing apical part. The in situ hybridization experiments revealed the PrSUT1 transcript accumulation in the mature phloem cells of both subterranean and flowering shoots, as well as in shoot terminal sinks corresponding to apical meristem, scale leaf primordia and immature vasculature. The transient expression experiments in Arabidopsis protoplasts showed that PrSUT1 was localized at the plasma membrane, suggesting its role in phloem functioning and sucrose uptake by the sink cells in P. ramosa. Conversely, the PrSUT2 transcript accumulation was constantly low in tubercles and shoots but PrSUT3 transcripts accumulated markedly in the subterranean and flowering shoots, in concordance with the PrSUT3 mRNA accumulation in multiple sink areas including apical meristem, scale-leaf primordia, immature vasculature and even storage parenchyma. However, the PrSUT3 transcripts did not accumulate in the mature phloem cells. The transient expression experiments in Arabidopsis protoplasts suggested a tonoplast localization of PrSUT3, for which nevertheless the involvement in intracellular sucrose transport needs clarification.

BACKGROUND: Some radiation-mutagenised chickpea mutants potentially resistant to the broomrape, Orobanche foetida Poir., were selected through field trials. The objectives of this work were to confirm resistance under artificial infestation, in pots and mini-rhizotron systems, and to determine the developmental stages of broomrape affected by resistance and the relevant resistance mechanisms induced by radiation mutagenesis. RESULTS: Among 30 mutants tested for resistance to O. foetida, five shared strong resistance in both pot experiments and mini-rhizotron systems. Resistance was not complete, but the few individuals that escaped resistance displayed high disorders of shoot development. Results demonstrated a 2-3-fold decrease in stimulatory activity of root exudates towards broomrape seed germination in resistant mutants in comparison with non-irradiated control plants and susceptible mutants. Resistance was associated with an induction of broomrape necrosis early during infection. When infested, most of the resistant mutants shared enhanced levels of soluble phenolic contents, phenylalanine ammonia lyase activity, guaiacol peroxidase activity and polyphenol oxidase activity, in addition to glutathione and notably ascorbate peroxidase gene expression in roots. CONCLUSION: Results confirmed enhanced resistance in chickpea radiation-mutagenised mutants, and demonstrated that resistance is based on alteration of root exudation, presumed cell-wall reinforcement and change in root oxidative status in response to infection. © 2016 Society of Chemical Industry.