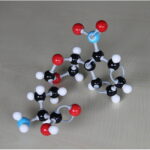 Taking advantage of the known planarity of the N-acetyl group of N-acetylglucosamine, an analysis of the quality of carbohydrate structures found in the protein databank was performed. Few obvious defects of the local geometry of the carbonyl group were observed. However, the N-acetyl group was often found in the less favorable cis conformation (12% of the cases). It was also found severely twisted in numerous instances, especially in structures with a resolution poorer than 1.9 Å determined between 2000 and 2015. Though the automated PDB-REDO procedure has proved able to improve nearly 85% of the structural models deposited to the PDB, and does prove able to cure most severely twisted conformations of the N-acetyl group, it fails to correct its high rate of cis conformations. More generally, for structures with a resolution poorer than 1.6 Å, it produces N-acetylglucosamine models in slightly poorer agreement with experimental data, as measured using real-space correlation coefficients. Significant improvements are thus still needed, at least as far as this carbohydrate structure is concerned.

Trapping by amylose of the aliphatic chain grafted onto chlorogenic acid: Importance of the graft position Article de journal

Human milk oligosaccharides (HMOs) are recognized as benefiting breast-fed infants in multiple ways. As a result, there is growing interest in the synthesis of HMOs mimicking their natural diversity. Most HMOs are fucosylated oligosaccharides. α-l-Fucosidases catalyze the hydrolysis of α-l-fucose from the non-reducing end of a glucan. They fall into the glycoside hydrolase GH29 and GH95 families. The GH29 family fucosidases display a classic retaining mechanism and are good candidates for transfucosidase activity. We recently demonstrated that the α-l-fucosidase from Thermotoga maritima (TmαFuc) from the GH29 family can be evolved into an efficient transfucosidase by directed evolution (Osanjo et al. 2007). In this work, we developed semi-rational approaches to design an α-l-transfucosidase starting with the α-l-fucosidase from commensal bacteria Bifidobacterium longum subsp. infantis (BiAfcB, Blon-2336). Efficient fucosylation was obtained with enzyme mutants (L321P-BiAfcB and F34I/L321P-BiAfcB) enabling in vitro synthesis of lactodifucotetraose, lacto-N-fucopentaose II, lacto-N-fucopentaose III and lacto-N-difucohexaose I. The enzymes also generated more complex HMOs like fucosylated para-lacto-N-neohexaose (F-p-LNnH) and mono- or difucosylated lacto-N-neohexaose (F-LNnH-I, F-LNnH-II and DF-LNnH). It is worth noting that mutation at these two positions did not result in a strong decrease in the overall activity of the enzyme, which makes these variants interesting candidates for large-scale transfucosylation reactions. For the first time, this work provides an efficient enzymatic method to synthesize the majority of fucosylated HMOs.

A large number of retaining glycosidases catalyze both hydrolysis and transglycosylation reactions, but little is known about what determines the balance between these two activities (transglycosylation/hydrolysis ratio). We previously obtained by directed evolution the mutants F401S and N282T of Thermus thermophilus β-glycosidase (Ttβ-gly, glycoside hydrolase family 1 (GH1)), which display a higher transglycosylation/hydrolysis ratio than the wild-type enzyme. In order to find the cause of these activity modifications, and thereby set up a generic method for easily obtaining transglycosidases from glycosidases, we determined their X-ray structure. No major structural changes could be observed which could help to rationalize the mutagenesis of glycosidases into transglycosidases. However, as these mutations are highly conserved in GH1 β-glycosidases and are located around the −1 site, we pursued the isolation of new transglycosidases by targeting highly conserved amino acids located around the active site. Thus, by single-point mutagenesis on Ttβ-gly, we created four new mutants that exhibit improved synthetic activity, producing disaccharides in yields of 68–90% against only 36% when native Ttβ-gly was used. As all of the chosen positions were well conserved among GH1 enzymes, this approach is most probably a general route to convert GH1 glycosidases into transglycosidases.